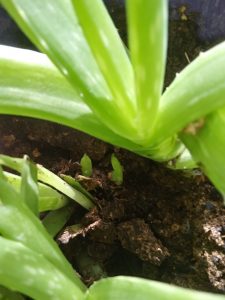 Down at the base of the top big stalk – the first new aloe vera puplets since the Great Divide are here! It’s been a bit of a long trek for the plant bois. First it rained three days straight after I divided up the big family pot and before I could plant them again, so that they were left high and dry out of dirt rather longer then I’d intended. 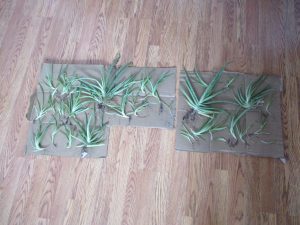 Then I repotted them in the local semi-arid soil, reasoning that it should be perfect for succulents; but as it turns out our heavy clay is not suitable for succulents that didn’t evolve in it. So after the trauma of division and potting I took them all back out and repotted them yet again in new sandy soil. They’ve been recovering and settling in again for a while since then, but I think the new babies mark them well and truly adjusted.

The recovering aloe vera have definitely been the plant focus lately, but here’s the big picture on domesticated flora right now: 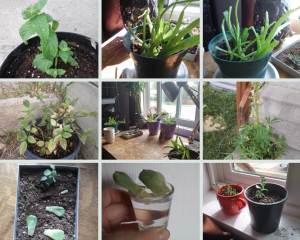 There in the middle you can see how much my desk is taken over right now – once I give away some of these aloe vera (like a litter of kittens, there’s just too many cute babies to keep) I’ll have more room again.

The bottom row is all succulent propagation – left to right we have a shallow prop tray (it’s a box lid with succulent soil in it, which actually works really well – the cuttings don’t need to be watered, so it’s holding up fine, and lives happily on the desk), an effort at water propagation, and two cuttings from earlier that very recently transferred from the tray to their own pots.

Partially due to the desk situation, partially just for sunshine, hardier plants are living outside right now- the rosebush (left middle) is distinctly depressed, but I know it’s not from the climate since its siblings live outside too, and this one was going downhill even before it went outside. Things aren’t looking good, but I’ve seen these mini roses come back from nothing but green stems, so I’m holding out hope.

The lupine (right middle) is doing brilliantly. I’ll move it to the garden before I go back to college this fall, but hopefully collect the seeds from that tall seed stalk before then.

Top left we have an experiment in mint stubbornness. How should you not take a mint cutting? Well, probably don’t pull a stray shoot out of the ground by the roots, stick it in a glass of water for a week until you get around to prepping a good pot, and then plant it.

Or go ahead and do that anyway, because it seems to have worked. For a little while the shoot kept growing straight up and putting out those big leaves you see, but it seems to have realized that it’s all alone now and has begun bushing out with those little shoots you can see around the bottom.

At eight different species of houseplant – not even counting how many different pots of aloe vera I have right now – they’re… definitely not all coming with me this fall. I don’t even know how much sunshine I’ll have, which could be a major problem. But we’ll cross that bridge when we come to it, and until then the bois here are (for the most part) green and happy.

3 thoughts on “puplets and plant bois”